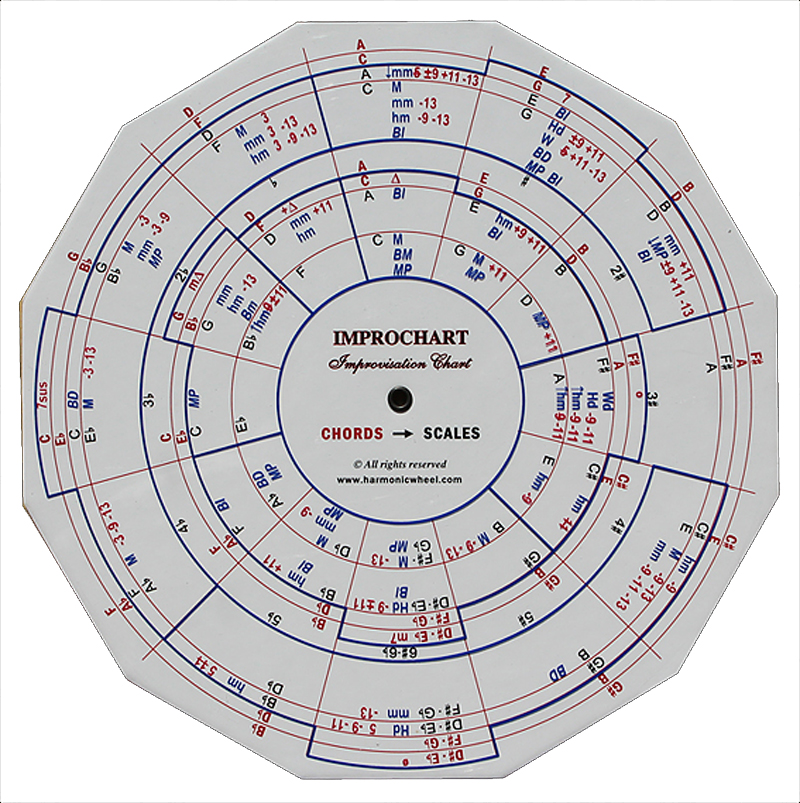 Want to know easily which scales relate to a given chord? Just rotate these 2 attached discs and you will know. It comes with instructions, scale tables and a practical protective case. 10 basic chord types are considered, plus their possible tensions, as well as 10 scale types. An equivalence table for other types of chords is also included. The scales have been classified into Basic (major, melodic minor and harmonic minor), Symmetric (diminished and whole tone) and Special (several Bebop scales, Pentatonic and Blues). Thus, a complete set of scales is available for improvising on a given chord.

Moreover, with the aim of making the initiation to the improvisation easier and friendlier, a set of practical tables containing all these 10 scale types in every key is included. Finally, this instrument together with the scale tables, are designed in such a way that users need not know how to read music.

Want to have an easy way to get a good technical knowledge of scales, keys, major and minor chords, harmonics...? Use this musical abacus consisting of 2 rotating discs. By rotating the discs you obtain, in each of its 12 possible positions, a major key and its relative minor, the corresponding major scale and its relative minor, the intervals from the tonic of the major scale, the 3 main chords in both keys and their arpeggios, the harmonics produced by the tonic of the major key and the corresponding key signature for both keys.

All these concepts are basic in any musical style, such as: classical music, modern music, jazz, latin music, etc. The included extra sheet explains how the harmonics establish the consonant intervals and then the major and minor chords, from which the scales and keys are finally formed.